Like many have noted, geeks hear that word and they almost always want to say "...the final frontier" immediately afterwards. However, unlike those who noted that during this challenge, I'm not going avoid that topic. I'm going to go with it.

Space is not only the final frontier, it's also a cool place to play D&D. Now, when I say that, most people think of Spelljammer. And that is 100% legit. But, aside from a con game or two, and a couple of aborted attempts back in the day, I never really got into that setting. No, my preferred "D&D in space" game was Dragon*Star. 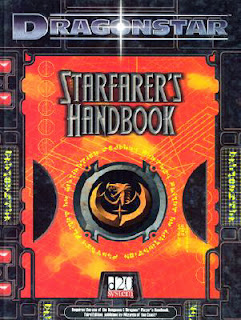 For those who may not know (or remember), Dragon*Star was a setting published by Fantasy Flight Games. You can read all about the setting itself on the Wiki page, so I won't detail that. Suffice it to say, this setting blended the standard pseudo-medieval, magic-infused fantasy of classic D&D with the expansive, high-tech, galaxy-hopping space opera.

I ran a campaign in the setting for my group back in San Diego, and it was a hoot. In fact, to this day, echoes of that campaign still linger in my mind, and sometimes find their way into my fiction-writing attempts.

What made Dragon*Star cool was that it was based on 3rd Edition D&D. This made it compatible with all sorts of official and third-party products. You could easily pull in races, classes, spells, and equipment from dozens of supplements and setting books in order to make it the science-fantasy game you want.

I would love to see Fantasy Flight do a 5e update for it. But, I don't think that will happen, as they are focused more on non-RPG products right now, if I recall. Still, I'm sure if I looked I could find plenty of fan material to run it using 5e. If only I could convince others to play it with me...
Posted by Tom Doolan at 5:15 PM