This past weekend was Gary Con.  All told, this was only my fourth gaming convention in my entire life.  Growing up overseas during my initial gaming years, going to things like Gen Con was't even an option, and I was barely even aware that such things existed.  So, to be so addicted to them already is pretty amazing.


As to this year’s Gary Con, it was a good time.  About what I expected.  As I stated before, all of my games were second (or even third) choices, so I went in to most of them with little to no emotional investment.  And yet, I still had a lot of fun for the most part.


My favorite game of the weekend was actually my first one.  On Friday afternoon, I took part in a game that used Dungeon Crawl Classics to emulate a post-apocalyptic world that was a mash up of Mad Max and Thundarr.  It was pretty damn cool, actually.  Some of the rules were a bit odd at first, and the heavy reliance on random outcomes (through tables) was jarring.  But it all worked out, and it even had a personally satisfying climax for me.  Friday night was the planned steak dinner with friends.  Mmmm…steak…


Saturday morning started with a game at 8:00.  We stayed up pretty late Friday night, so I was draggin’ ass already.  But, with the help of some coffee, I muscled through it, and had a pretty good time.  It was a Castles & Crusades game.  Pretty standard fare.  The GM kind of had a hard time keeping on track, and he kept missing what players were saying in order to explain some minor detail to another player.  It could have been better-run, but it could have been worse.


After a quick lunch with my wife, it was a 3.5 game which ended up being our regular D&D group from home, minus my wife and one other.  It was a high-level game, involving dragons and such.  However, we got a late start because Luke Gygax [namedrop] didn’t give up our table for a half hour.  So, we lost a lot of play time.  Then the DM kind of screwed us by having an encounter begin at extremely long range, so we ended up spending five rounds of play running uphill and dodging boulders.  Kind of frustrating.  But, we made it through, got to the lair and took care of some business involving a sick and insane gold dragon, and then…we ran out of time.  So, we narrated a bit about the final encounter that we never got to do, and that was it.  Honestly, if the DM had better managed the first encounter, we could have done the last.  Anyways, it was still fun.
Saturday evening was supposed to be a Tekumel game for me and a C&C game for my wife.  But, due to being over-tired from the night before, we both bagged out, spent a little time with friends and went back to the hotel to rest instead.  I kind of felt bad for being one of THOSE gamers, but it really couldn’t be helped.  Something to keep in mind next year.


Sunday morning had us in games at 10:00.  Mine was a 2nd Ed. AD&D game, and another high-level adventure.  It was pretty fun, though the group tended to overthink everything, and for some reason THAC0 was giving me an aneurism (my basic THAC0 with my bastard sword was -1, so I only missed on a roll of 1 in most cases).  In the end, we didn’t defeat the evil, and “lost” the game, for lack of a better term.  That was disappointing.  I know it happens, but it just goes against my style of play.  We’re the heroes, gawdammit!  As it was, that one lasted 6 hours, and threatened to run over.  Since my wife’s game had ended two hours earlier, I was actually just glad to be done.


As I said, it was a fun weekend, despite not getting the games I wanted.  I think the lesson learned here is not so much to aim for the games you DO want, but to avoid the games you DON’T want.  No more 2E for me, thank you.  That game reminded me of why, when I got into 3E, I never looked back.
Now, to get ready for Gamehole Con in November.  More on that later.
Posted by Tom Doolan at 10:20 AM No comments:

Gearing up for Gary Con 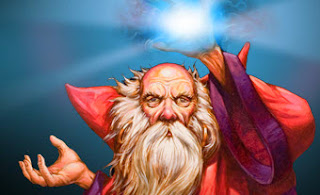 This Friday I will be neck deep in gaming goodness.  Although I’d love to go for all four days (maybe next year?), we can only do three.  So, Friday morning we’ll get up, drop my son off at the bus stop, and then head out for Lake Geneva, stopping for a nice breakfast on the way.  Our first games aren’t until noon, so we should have plenty of time to browse and maybe do some shopping.


I’m probably not going to buy much this year.  Last year we kind of went all out and got two signed poster prints by Larry Elmore.  I also bought the Castles & Crusades PHB. And I think we bought a couple of other things.  This time, I might get some new dice, maybe a fig or two, but not much else.  I already have a ton of games I need to get rid of.  And with us moving at the end of summer, I want to keep my purchases to a minimum.


That being said, if I see something that I HAVE to have, I’ll probably grab it if I can.


Over all, I’m really looking forward to the games I am in.  I’m still a little bummed that they are all fantasy, but they at least all sound interesting.


Was discussing the future of Mutants & Marvels with the wife yesterday.  I think for Gamehole Con, I’d like to run a game.  The idea makes me nervous, as I don’t consider myself a very good GM.  Plus, if it’s a bad experience, I have no one to blame but me, since I can’t even blame anyone else for writing a shitty game.  But, it’s a great way to get the exposure it would need to generate interest.


I’m still working on updating the game file.  And it will be published in print in a new, larger format.  I have ideas for more content, such as expanding the setting enclosed a bit, adding some named NPC characters, and some mundane locations and such.  But, the main thing I want to do is have some real, comic book-quality artwork.


I have been considering the idea of crowdfunding the costs to hire a good artist.  No idea how much that would be, so I can’t decide if it would be worth it.  In the meantime, I’m going to try to do some myself, and see how that turns out.

On a whim, I downloaded Star Trek Online, and started playing it.  I had been hesitant, because the idea of playing a bridge officer on a starship just seemed kind of silly.  And honestly, the setup was a bit forced, but very much in line with the melodrama that is Star Trek.  The whole time I kept hearing Sulu in my head saying "So much for a little training cruise.."

Speaking of Sulu, his grandson, Akira, is a contact at the Spaceport.  And that's just one of the many references to Star Trek canon.  Overall, it's a pretty fun little game.  And just like any MMO, when you are in a "central hub" type of area, there are all kinds of characters standing around where, in "real life" there wouldn't be.  The cool thing is that, in many instances, those "characters" are starships.  It's pretty neat to see the different ships, and see what people name them.  I'm currently in a modified Miranda-class called the USS Steve Rogers.

I think my only complaint is the starship combat is a bit funky, because all of your movements are on the keyboard, or you are clicking on icons, all the while trying to keep your camera faced in the right direction so you can see what you are shooting at.  I might play with it some, and see if I can streamline how things work.  But, it's workable for now.  Anyways, if you play, look me up.  I'm tyler@gotstsu005.

I also started cleaning up my various books and such.  I have a bunch of paperbacks that I trying to sell.  A lot of Robert E. Howard, since I have most of the Del Rey collection already.  And now I am thinking of doing to same with some of my RPGs.  I have various old games hidden here and there around our house, not to mention what's out in storage.  And these are all games I know I will never play again, if I ever played them at all.

For my paperbacks I created another page on my other blog to list them on.  I might do the same here for my games.  So, if you stop by sometime, and see a tab at the top for "Used Games" or some such, that's what it will be.  Otherwise, I may just list them on Amazon.

Not much to report on the game-writing front.  I have been a bit pre-occupied with life and especially school.  I am in my final class for my masters in History.  And next month I will be taking a short exam prep course, that will culminate in taking a comprehensive exam.  Started doing some research on that yesterday, and just about broke out in a cold sweat.  I am horrible at remembering names and dates (a bad trait for a History major).  So, this will be a struggle for me.  But, once that is done, I am sure I will get to more writing of all kinds.
Posted by Tom Doolan at 10:25 AM No comments:

Read an RPG in Public! 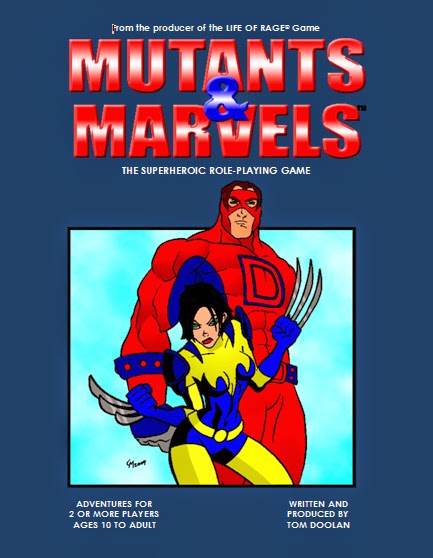 So, it's Read an RPG in Public Week again.  Tell you what, if anyone posts a picture of themselves (or someone else) reading Mutants & Marvels in public, I'll figure out some kind of prize to give you.

As for me, I will probably take my 5E books out for a spin.  I need to really dig into that DMG.  I've had it for a couple of months now, and haven't been able to give it a good breeze through.  And with all the cool stuff I am hearing, from all points in the D&D spectrum, I feel like I'm missing out.

Of course, if I could actually play in a game, it would have been more of a priority by this point...
Posted by Tom Doolan at 1:43 PM No comments: