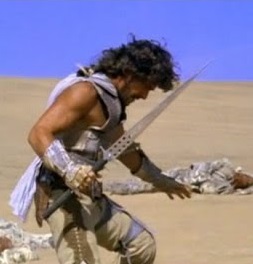 In my last post I talked a bit about my game du jour, Fists & Fury.  Therein I brought up the idea of creating a setting for players to take the tactical fighting game into full-on role-play.  I’ve been mulling over several ideas, from setting it in ancient China, to creating a fantasy clone of the ancient Orient, to even setting it in the American Wild West (this based on a recent bookread).  But, none of that really appealed to me, mainly because it had all been done, and usually done better than I can do it.


But one idea has kind of stuck with me, and even though it’s not 100% original, I can at least make it somewhat unique.  Basically, I’m thinking of a post-apocalyptic future, where, after some great war, machines don’t work properly, if at all, and modern weapons are useless simply due to the scarcity of ammunition and the lack of knowledge to produce more.


Some of you may notice a passing resemblance to one of my favorite Manga and Anime films, Fist of the North Star (not to be confused with that horrid live-action one).  Basically, take out all of the biker gangs, cars, and firearms, and add in a wider serving of martial arts, and there you go.


Right now, I’m thinking of not using a nuclear war, so no mutants and bizarre creatures.  Basically, the characters would be fighters who wander in an “old west” type of agrarian setting, defending common folk from bandits and other villains, with the liberal use of martial arts.  I think that that late-80’s retelling of Shane known as Steel Dawn (starring post-Dirty Dancing Patrick Swayze) would serve as a good model.  Probably a perfect model, actually.


Thoughts and/or opinions?
Posted by Tom Doolan at 1:03 PM No comments:

For those of you following along at home, you may see that most of my RPG efforts have been aimed at Mutants & Marvels for several months now.  And it finally culminated in the release of the print edition last month (of which I have sold exactly one copy so far).


During that period I tried to generate a “community” of sorts on Facebook with a Group devoted to the game.  But, while I have gotten several new likes with the release of 2.0, and a few devoted commenters, the discussion part hasn’t really caught on.  Not sure what I expected, so I’m not all that disappointed about that.  Still, it’s there if anyone is interested.  One thing that the group has served well is as a place where players can ask for rules clarifications.  I actually love those little “How would M&M handle this?” type of things.  So, if you have the game, and something doesn’t seem to jive, feel free to ask on the group.


The unfortunate side-effect of being a one-man show when it comes to writing the stuff I do is that burnout comes on a little quicker.  With a stable of writers, editors, and artists, I could hand parts off to others, and step away for a bit until I need to look at it again.  But, when it’s just me, I get to look at everything.  Basically, what I’m saying is that I am all M&M’d out right now.  So, I think I’m going to just let it sit and marinate for a while, while I work on other stuff.


One thing I have been working on lately is a martial arts micro-game.  I think I may have mentioned it before, but it’s basically a martial arts-themed variation of the idea behind Steve Jackson’s Fantasy Trip games (mostly Melee).  It’s called Fists & Fury, and right now it’s about 8 pages of rules and ideas.  It’s a pretty simple system, with a mechanic that is basically a streamlined version of the mechanics used in M&M (in fact, it started out as a supplement for M&M, but I changed directions with it after I got started).


Initially, it was simply about creating fighters, and pitting them against each other on a hex grid.  But, as I was writing, the RPG gamer in me started wondering how much it would take to expand it into a full-on RPG.  My original idea was to create a second set of rules for that.  But, after I realized that the system in place was so simple that it wasn’t going to be very long in form, I started adding optional rules for things like skills, backgrounds, and whatnot.  And now I am considering creating a complete setting book that you can play F&F in as an RPG.  Something along the lines of Avatar.


I’ve always thought that show was perfect for an RPG.  But, since no one is doing one, and I could never afford to get the rights to do one myself, F&F will just have to be my surrogate.


Anyways, as for actually playing games, my gaming group is on hiatus for the summer, due to family vacations and such.  We plan to start back up in August with my wife’s Dragon Age game.  Still waffling on what character I want to play for that.  But right now I am leaning towards a female city-elf swashbuckler.
Posted by Tom Doolan at 8:54 AM No comments: