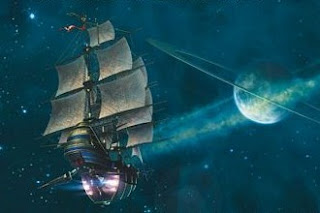 Lately I have been hankering to dig into a D&D campaign. Right now my group is playing Dragon Age. It’s a great game, and a gritty, dark world. Very non-D&D in nature, though it shares some elements. All-in-all, I like it a lot, and definitely don’t want to stop.

But, my preferred style of fantasy gaming is that which is captured by standard D&D (regardless of edition). So, I’m always on the lookout for a way to add a D&D game into my schedule. It’s kind of a pipe-dream, due to a lot of schedule conflicts. But, I can hope.

One way I deal with this is by imagining what world I would run a D&D game in myself. Now, I would much prefer to be a player, but if I had the right group in the right setting, I could really dig running a game.

I had started imagining a world with new races, old races re-imagined as different cultures, and stuff like that. The whole world kind of sprouted from my desire to play a game that had flying galleys. I don’t know why, but the idea of flying ships like that just tickles my fancy. Probably why I liked Treasure Planet so much. The topography for my infant world is a mixture of impassable rifts and floating land masses, which necessitates the flying ships, and other aerial transportation.

Then, the other day, I got inspired by an idea from my past. Many years ago, my friend had the idea of creating a fantasy version of Star Trek using the Spelljammer rules. He had fantasy equivalents for most of the Trek races (Vulcans were Elves, Romulans were Drow, and Klingons were Orcs, for example). But, since he didn’t have his old notes anymore, I decided to start working on a 5E conversion myself. So far, here is what I have:

Background
The PC’s are part of the United Federation of Spheres exploratory space navy, aka Spellfleet. Spellfleet is comprised of many races who have banded together to explore new worlds, seek out new life, and new civilizations, and to boldly go where no one has gone before.

The Rules
There are many member races of Spellfleet, and theoretically, just about any sentient race could have a part in it. However, for this campaign, the following (and their ST counterparts) form the core races:

Non-Standard races that could be allowed with DM approval:
Dragonborn (Cardassians)
Tieflings (Jem’Hadar)

Spellfleet is often opposed by several space-faring races who do not subscribe to the altruistic and positive philosophy of the UFS. These include the following (among others):

As you can see, I’m mixing and matching stuff from the various Trek shows. Some of this may change as I move along, but I kind of like this as it is. My next thought is to do a PHB-style write up of each playable race.

If I ever finish this (and that’s a big “if”), I’ll probably put it all together as a PDF and offer it for free here. I don’t even want to consider how I would need to navigate all of the copyright issues.