Not very good at this


I often read blog posts and forum posts from other gamers where they dissect games, rank features according to their usefulness, and pass judgement on the game, based on long, thought-out processes.  I don’t do any of that.  To me, the rules of any given RPG are simply a means.  All they do is describe how you roll your funny little dice, and how you interpret the results.  The mechanics don’t have much impact on how I “play” a given game, for the most part.


Ever since discovering the OSR movement a couple of years back, and kind of diving in headfirst, one common theme has come up when reading old-school gamers’ opinions of new-school games (mainly D&D 3+).  And it can be summed up by a phrase I have seen so often I reflexively roll my eyes when I read it now: “I can’t wrap my head around…”


I can’t wrap my head around Ascending AC.


I can’t wrap my head around Monster Levels.


I can’t wrap my head around not having a TPK every other session.


I can’t wrap my head around color artwork in RPG books (Seriously? Yep.).


I’m fairly certain that a number of Grognards are so set in their ways, and so convinced that the old games were perfect, and that any change that didn’t come from their own brain couldn’t possibly be an improvement, that they go into anything new with a closed mind.  So, in essence, anything they “can’t wrap their head around” is because they simply don’t want to.


Which is fine.  If it ain’t broke don’t fix it.  Cool.  I get that.  But, what I don’t get is feigning not understanding something just so you can claim it’s too complex and bloated.  That just seems arrogant to me.


I dunno I could be wrong.  In which case, I apparently “can’t wrap my brain around” OSR in general.  I like the old games.  I have many fond memories of them.  And I think some of them are actually still quite playable in their original form.  But, I really dig the new stuff.  New editions, new mechanics, new ways of doing things.  It’s all good (except 4E).


Maybe I just need to hang it up.  I’m not into gaming as much as I used to be, or as much as I’d like to be.  I have one game going, and it gets trumped by non-gaming life so often, we rarely get to play regularly.  And I don’t have time to play other games.


Then there’s the fact that I like to play at writing gaming stuff, but it’s all for games that I don’t play. And probably never will.  If I think about it, that actually seems like arrogance too.  And that doesn’t sit well with me.


I’m not sure what I’m getting at here.  But I do know that I will be taking a step back from gaming in general.  If for no other reason than to just to figure out what role it plays in my life (no pun intended).
Posted by Tom Doolan at 10:55 AM No comments: 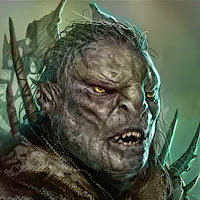 Ever since Tolkien first talked about the armies of Mordor being orcs, it seems a universal constant that every high fantasy* setting has some sort of variation of the theme.  This is even more prevalent in RPG’s.  I am hard-pressed to think of a setting that I have read that doesn’t have some “evil” race as the default minions of the Big Bad’s army (of course, the Big Bad is another element that could have its own post).  Let’s look at some examples from my own fuzzy memory.


Forgotten Realms/Greyhawk/Etc.
From the earliest days of D&D, it seems to always have been a given that orcs exist, they are evil, and they fill the ranks of invading armies.  Modeled in large part on Tolkien’s work, orcs provide instant universal enemies for players.  They are always unquestionably (and sometimes, inexplicably) evil, savage, and available in large numbers.  They also tend to be somewhat easy to kill.  Basically, they are the fantasy multiverse’s cannon fodder. 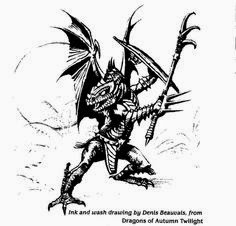 Dragonlance was unique not only for putting dragons front and center, and making them the focus of the entire world, for the most part, but it also created a new race that effectively replaced orcs as the rank and file of the evil armies.  In fact, orcs don’t actually exist on Krynn.  This was a really big thing, if you think about it.  Not only because orcs are such a fantasy mainstay, but also because their replacement, the dreaded draconians, came in different shapes and sizes, with different abilities and aspects.  I remember reading the Chronicles and being wowed whenever the Companions came across yet another breed of draconian.  In my opinion, this is probably the best instance of using non-orcs for that universal purpose. 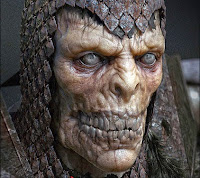 I have been playing a lot of Dragon Age (Origins and Awakenings) on my PC, thanks to my wife’s obsession with it.  And she is planning on running a tabletop campaign using that setting and rules soon.  In  Dragon Age, orcs are replaced by the Darkspawn.  These creatures are similar to orcs, but more brutal, more savage, and frankly, more disgusting, if you can imagine that.  They are integral to the plots of the video games (especially Origins), and so are necessary.  Like Dragonlance, there are no orcs in DA either.  However, functionally, Darkspawn are pretty much just like orcs.  They are tough and scary, but ultimately, not that hard to kill.  And aside from the taint in their blood, there’s little to set them apart from other evil monster races.


The Hyborian Age
I would also contend that Robert E. Howard might have planted the seed that Tolkien grew.  Although they never become an evil army marching across the continet, the Picts in Conan’s world are very orc-like in many respects.  True, they are human, and they are modeled largely on Native Americans (viewed through the lens of Old-Worlders).  But, they do have a certain primordial savage quality about them that makes them seem almost orcish to me.  And if I recall, during the ancient past detailed in his essay The Hyborian Age, the picts actually did march across the lands and conquer nations and peoples, before being pushed back by Conan’s ancestors.


So, what else is there?
These are just a few examples.  And I am sure others might recall more such races in fantasy gaming and literature.  But, as a chronic creator and tinkerer myself, I often wonder if there are other races that could fit this bill, given the right treatment.  Just using races familiar to D&D players, one could do the same with goblins, hobgoblins (I’m digging that one a lot, actually), bugbears, lizardmen, kobolds…pretty much any humanoid monster race could be elevated to be the “orc” for a given world, I suppose.  (Try this list: Humanoid (Dungeons & Dragons)).


So, which would you choose?


*I define “high fantasy” as a type of fantasy that is half or more populated by fantastical races and creatures.  Typically, elves, dwarves, wizards, trolls, etc.  Your definition may vary.
Posted by Tom Doolan at 12:00 PM 4 comments:

The good news is, I got the proof of the PoD version of M&M yesterday.  The book is nice, the paper is slick and not flimsy.  The overall quality of the book is outstanding.  However...

The bad news is, I hate how it looks.  I don't like how the cover image is laid out.  I don't really care for the orange (it looks better in PDF than in print).  And for some reason, the font is weird in that some letters kind of get squished together.  Looking at the PDF and comparing them, it doesn't do that in the PDF, so it has to be an issue with the printing process.  Which is disappointing.

That being said, the book is readable, and it looks really nice.  So, I'm going to re-do the cover.  I've enlarged the logo and the text, and shrunk the image of the heroes a bit.  It all fits much more nicely now, with much less negative space.  But, I'm not sure what to do about the background color.


I originally went with the orange as an homage to the original Campaign Book in the TSR boxed set.  But, the reds in the logo and image kind of "blend" too much with it.  I experimented with a few other shades in Photoshop, including just a basic gray.  Some of them are ok, I suppose.  But right now I am seriously considering either basic white or black.  Thoughts?

Not sure what to do about the text inside.
Posted by Tom Doolan at 3:28 PM 4 comments:

So, the sales numbers for M&M 2.0 are...underwhelming.  But, I suppose I expected that.  With the way I published it, the majority of sales that I have gotten have been for the previous edition, and all of those people got the upgrade for free.  This only seemed fair, since otherwise people who liked it would have had to buy it twice.  So, I don't regret the decision.  Just...eh.  Just whining, I suppose.

Anyways, I'm already laying some groundwork for the first official supplement.  This will be several articles on alternate rules, rules additions, and some pre-made, ready to play characters.  My current idea is to present them with backgrounds and everything, but add in Hero and Villain options.  This way the Referee can decide how the character fits into his unique world.  I'm calling the whole thing Mutants & Marvels Unlimited.  I think that sounds suitably comic booky.

Interestingly, when I ask for suggestions for things to do, I get a lot of people asking for adventures.  I'm sensing there is a niche market here.  The downside is, I'm not very good at writing adventures.  It takes a certain skill set that I am, frankly, underdeveloped in.  But, I think I have some ideas.  Chances are, I will take the characters I create for Unlimited, and build adventures around them.

But, related to that, since the game was originally built around the OGL, this opens it up for others to write and publish their own adventures.  In fact, I'm thinking of creating some kind of mechanism where people can write adventures, send them to me, and I can format and publish them, and we would split the profits, with the majority going to the writer.  DwD Studios has a thing like this in place for their Covert Ops line.

I'll have to give that some thought, and figure out the legalities and mechanics of how it would work first, though.

And finally, I expect to have my proof copy of the PoD version in my hands within the next week or so.  That's pretty exciting!
Posted by Tom Doolan at 8:57 AM 2 comments: