I'm back with something new!

Hello all! I’m back. Been a while since I had the gumption to blog about gaming. I’ve been wanting to, but nothing inspired me. So, while the blog sat collecting dust, I did some things.

One of those things is a new class for 5E. Basically it’s a variation of the Monk, but with a Western-inspired theme, rather than an Eastern theme. From the description: 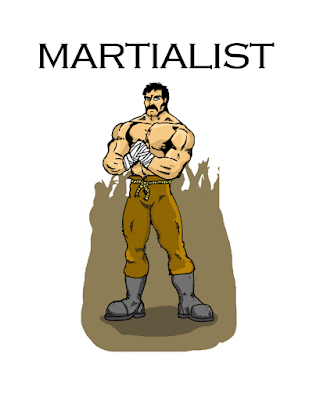 In some settings, having Asian-themed characters doesn’t always make sense. Whether it be the distance they would have to travel to get to your pseudo-European lands, or the fact that Asian-inspired cultures don’t currently exist in your setting, there could be a number of reasons why a DM would not allow the Monk class, as presented in the PHB, in his campaign. Which, will quite often upset at least one player at any given table.

Presented here is an alternative class to the Monk. The basic principle is the same. A class that primarily uses unarmed combat, wears little to no armor, and can channel an inner energy to help them fight more fearsome and supernatural foes. Albeit with a western flair.

Alternatively, if the Monk is allowed in your campaign, it might be fun to allow this class as well, just to add a new element to character options.


This is the first 5E product I’ve felt remotely comfortable putting out there, really (although I had previously shared the Kensai here, which was a portion of this that got replaced). I have a few other tidbits that I am considering putting out too. Mainly new races, so far.

One thing I decided when putting this out is that I needed to adopt a new way of doing things in order to handle my anxiety about my stuff. So, I dubbed all of my products as “living playtest” versions. What that means is that when you buy something I wrote, you are essentially buying a playtest version. And when I get some feedback about how things should be changed, I will usually integrate the changes I agree with, and re-publish the product. This works great for PDF products because, as a purchaser, you can re-download the updated version for free. This has worked well for a few of my other products.

Anyways, if you’re interested in the Martialist, it’s only $1.99 at DMSGuild. As it’s a D&D 5E product, I can’t list it at RPGNow directly.

Spread the word! I need the money to go to Gamehole Con this year!