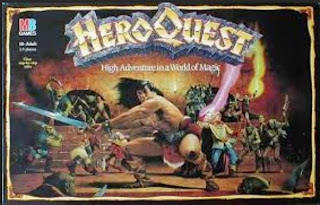 So, my 7-year old son has become obsessed with my 1990 copy of the Milton Bradley release of Hero Quest. I started him off a while back on it (at his request) by taking him through the main quest book, with the intention of going through all of that, then digging out the two expansions that were released before the game went out of print. Well, things have changed. And actually, for the better.

You see, my wife and I have a gaming group of other parents who have all been gaming together for several years now. We went through a 6-year campaign using 3.5, which ended last summer. We have since moved into Dragon Age, being run by my wife. All that time my son, and usually my stepdaughter when she was not with her dad that weekend, would be hanging out in basically a gamer environment.

He would normally play video games with the other kids, and sometimes they would even play with Nerf guns and other toys. But recently, he had me get out HQ for him, and he has been trying to play it with the other boy who is almost as consistently there as he is. The problem is, the other kid, just like my step-daughter is now 13. And the age gap sometimes causes problems. In a nutshell, I’m the only one who will consistently play HQ with him now.

However, I recently discovered that, during those few times he managed to get the other boy to play, my son would “DM” the game. And not only that, but he would do it without a script. He just placed doors, objects, and monsters where he liked as the heroes would venture through, and eventually, he would just put a “big bad” in a final room, and that would be it. I was kind of amazed.

As imaginative as I was at his age, I’m not sure I would have been that proactive. Of course, at his age (in 1977), I lived in Germany, and had no friends, let alone anyone who would be willing to expose me to anything resembling D&D, which was still pretty much in its infancy anyways. So the idea of making up adventures and rolling dice was as foreign to me as the internet was at the time.

Anyways, this has me thinking. One of the bloggers I follow (Timothy Brannon of The Other Side blog) often mentions introducing his son to D&D at 7 years old. I’m thinking maybe it’s time. I have all of the basic and Expert rulebooks, and several old modules. I’d probably go with the B/X rules, just for my own nostalgia (and because my Expert Rulebook is autographed by Dave Cook himself). Heck, I might even throw in some of my own Basic Arcana rules.

If it works out, I’ll be sure to write about it here.

Posted by Tom Doolan at 4:41 PM No comments: