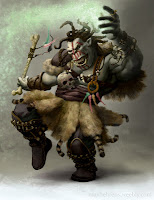 I am off of school this week, and I start my new class on Monday.  So, I keep trying to use the time to my advantage, and get some writing done.  I've worked a bit on some fiction.  But a lot of my time has been split between two RPG projects.

The first is the conversion of Life of Rage to OSR.  Mainly, it involved coming up with Orc classes that were comparable to the core classes in B/X D&D, but still having the proper Orcish flavor.  The first few were easy; Orc, Goblin, Half-orc.  It's the Shaman that was giving me trouble.  But, I think I have it figured out.  So, I can move forward a bit faster now.

Most of the rest of the conversion is done.  Fortunately, when I constructed the original version of the game, I kept the "setting" information separate from the mechanics, for the most part.  So, most of that information just got copied over as-is.  When it's all done, I will have to go through and make sure any references to the original system are edited to be for OSR.  But, other than that, there's not much else to do beyond filling in a few details (currently working on Shaman Spell descriptions).

My other project is a campaign based in an original world, using the Moldvay/Cook books, as well as my own Basic Arcana and some house rules.  I'm cobbling it together from a basic idea I used in a 3e game several years ago.  It's a cool story, with the properly epic feel, and a logical way for the character to know each other and adventure together already built-in.  Not sure if it will get played or not, but it's kind of nice to just be writing an adventure again.

As for currently active gaming, our long-running campaign resumes on Saturday, with part two (and hopefully, the conclusion) of our assault on the Frost Giants' Hall.  Norwegian princesses need to be more careful with those things marauding around the country-side.
Posted by Tom Doolan at 8:31 AM