In an effort to get back into blogging (yet again), and to dust off my writing skills a bit, I’m going to attempt the 2019 RPGaDay challenge. 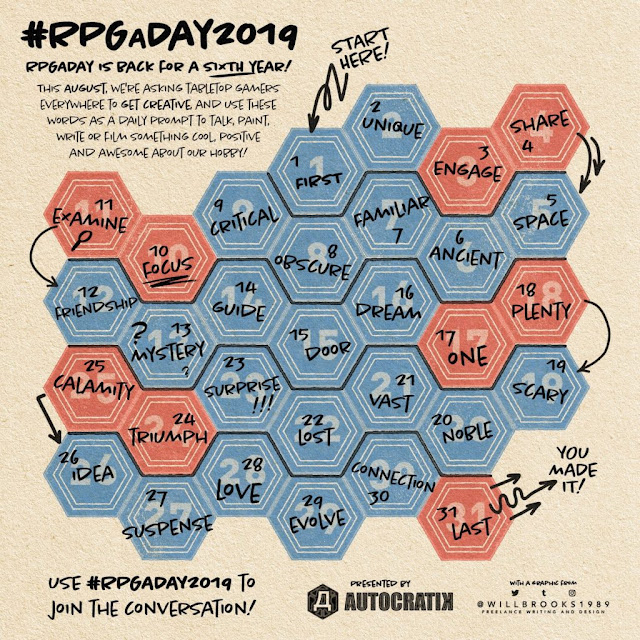 Doing the math, it had to have been 1981 when it started. It actually began that summer, when my stepdad had decided to go back into the Air Force, and he convinced my mom to join up too. We lived in Coffeeville, KS at the time, and I had just finished 5th grade. Since they were going to be in military training for many months, I was sent back to my hometown of Walnut Creek, CA to live with my mom’s parents. So, that fall I started 6th grade in California.

Soon after school started, I met Richard Schmidt. We became fast friends because we both liked baseball, and probably some other stuff that 10-year old boys liked at the time. Then one day he asked me that fateful question: “Do you play D&D?” My response was, of course, “What’s that?” And then my life changed permanently on some level.

I wish I had cool stories about those early sessions. But I don’t. I’m not even sure we actually ever played. But, I do remember making characters while we were at school, and after school at his house. At the time my only reference for that kind of fantasy was the 1977 Rankin/Bass The Hobbit, and Ralph Bakshi’s 1979 The Lord of the Rings.

By my birthday that December, I was hooked, and I convinced my grandma to buy me the Moldvay boxed set. My 11th birthday was spent at Chuck E. Cheese, followed by a sleepover with Richard and few other friends, including Jeff, who I knew from church. We played at playing D&D (I have a couple of pictures to prove we had the books out), but, again, I don’t think we actually played. In fact, my first recollection of actual play was a couple of months later when Jeff was over and he ran me solo through Slavepits of the Undercity, which his mom had bought for him to give me as a gift (I’m not sure any of us really understood the difference between Basic and Advanced D&D yet).

Anyways, that was my first taste of a larger world that would quickly encompass games from all sorts of genres, and would provide the foundation for my interests and tastes in entertainment for life.