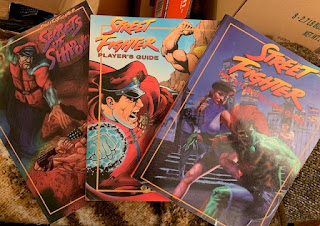 In the mid to late-90's I was introduced to the World of Darkness games. It didn't take long until I really go into it (Werewolf was my jam), even writing a supplement adding Gargoyles from the 90's cartoon in.

Around the same time, thanks in large part to this newfound internet thing (AOL FTW!!!), I also became obsessed with Street Fighter. So, imagine my joy when the two crossed paths.

I remember finding the main rulebook and two of the supplements on a used game shelf at a FLGS. I snatched all three right up, naturally. And then I set about making characters, debating the game online, and even downloading fan-made variations of it. But, you know what I didn't do? Play it. Ever.

I had a couple of friends who were mildly interested in the novelty of it. But no one showed much interest in actually playing it. I was a little bummed, but it was ok. It was still fun to read through and make characters. I even wrote some fan-fiction about one of them.

I still have all three books (pictured above). They're in pristine condition, and ready to play. Anyone interested?
Posted by Tom Doolan at 7:36 PM